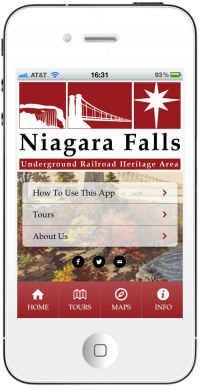 The Niagara Falls Underground Railroad Heritage Area celebrates and preserves the wealth of places and stories associated with the Underground Railroad found within the City of Niagara Falls and the surrounding region. During the 1800s the city was an established border crossing and served a critical role in the Underground Railroad by providing safe passage of slaves into Canada via ferry and the Suspension Bridge. Within the region there was an active network of Abolitionists and anti-slavery activists that helped provide money, food, and shelter to fugitive slaves, in addition to providing jobs and education to African Americans.

OnCell-TourSphere worked closely with the Heritage Area Committee and Environmental Design & Research, a landscape and environmental design consulting firm, to create a custom designed tour app that details the many historic sites across the region. The app consists of both a walking and driving tour, which overlap across multiple sites. The app offers interpretation via detailed history and historic imagery, and includes an interactive map which marks the tour routes.