Q&A with Stacie Parillo, Head of Collections and Manager of Digital Initiatives at Newport Historical Society 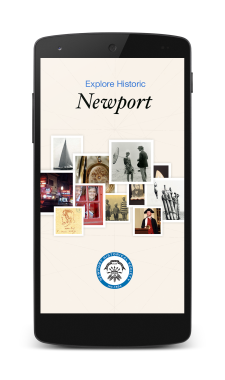 The Newport Historical Society originally launched their web app in November of 2012. TourSphere worked closely with the NHS team to develop a custom theme and build an app that launched a historic properties tour with over 40 sites. They have continued to grow their app over time to include special digital exhibitions of unique treasures from their collection, tours by theme, and additional points of interest that include the famed Newport Cliff Walk. The NHS has broadened the accessibility of their app by releasing both a native iOS and Android app.

Q. Can you say a few words about the success of the app?

A. The app represents an exciting new way for the public to access historical content that the NHS has generated, as well as raises local awareness of Newport’s historic significance by providing pride of place for residents. The app replaces the need for museum-loaned devices as visitors can access Explore Historic Newport from their own personal devices. A supplement to our guided tours, users of the app can curate their own experience of historic Newport, from anywhere in the world, any time of day or night. The history of Newport is now accessible in a way that it never was before.

Q. Why did you decide to create new native apps in addition to the web app?

A. We discovered that many people do not know how to use or are not very familiar with technology and many smartphone users are accustomed to going to either the App Store or Google Play to search for and download an app. The native apps were created to help those that were unfamiliar with the concept of a web app to still be able to access the content via the app stores – many smartphone users instinctively jump to the native stores when they think of mobile apps, so we wanted to work with that behavior.

Q. How do the native apps fit into your interpretive goals?

A.  The native apps will increase exposure and access, which will allow the app to do what we hoped from the onset – put Newport history in the palms of peoples’ hands.

Q. Do you have any new content that people familiar with the app may not know about?

A. Because the app is so flexible and accommodating, it is also infinitely expandable. A newer addition to the app is the integration of NHS exhibit content, allowing visitors to learn more about collections items on exhibit as well as the opportunity to virtually visit the exhibit. We have also started generating born-digital exhibits curated by interns that highlight their subject expertise and our collections. Historic sites continue to be added on a routine basis, and soon to be added are oral histories, video, and more exhibit content.

Q. How do you like working with the team at TourSphere and the App Builder?

A. We’ve had a very positive experience building the app with TourSphere – the team has been very responsive to our questions and concerns and have been quick to help us solve any issues that arise. The interface of the CMS is very intuitive, and has been able to be used by several staff members with little training, making it very easy and convenient to continually add content. It was important to us to make the app dynamic and current. We did not see this as a project that would ever be completed. The app would continually grow, never getting stagnant and TourSphere’s CMS allows us to do just that.

Download the native iOS and Android apps to take a tour through historic Newport, RI.