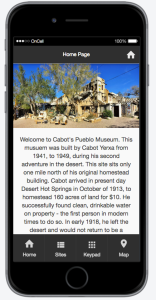 Listed on the National Register of Historic Places, Cabot’s Pueblo Museum preserves the homestead of visionary explorer, artist, and Mason Cabot Yerxa, whose discovery of two desert aquifers provides fresh water to California’s Coachella Valley and gave rise to the area’s hot springs resorts. After 24 years of construction, which began in 1941, Yerxa completed his 35-room pueblo, which was donated to the City of Desert Hot Springs after his death. The site is operated as a heritage museum and share artifacts of his travels, art, and collection of Native American artistry.

The newly launched Cabot’s Pueblo Museum audio tour shares the story of the adventurous pioneer and his self-built Hopi-inspired home.  The tour takes museum visitors around the structures found on the site’s 5 acres, on which the historic home sits. The app offers new interpretive content about these structures, such as the barn, tool house, and studio house, and prompts visitors to think about how they were created with locally sourced, repurposed materials.

“We have little interpretative material for the grounds and using the app will provide visitors with a stronger understanding of Cabot and simpler times in the Coachella Valley,” says Irene Rodriguez, Executive Director of Cabot’s Pueblo Museum. “Hopefully, the information found in the app will also spark greater interest and encourage users to take a guided tour, which is the only way to see the interior of the Pueblo.”

“Our process is to start small and grow. We’re excited to use the app as a tool to enhance the visitor experience and add more content over time,” says Rodriguez.

The museum promotes their app with brochures and signs for tour stops. The tour can be accessed by a dial in tour number or the mobile web app, which uses a keypad.

Listen to their audio tour with their mobile app at: cabotsmuseum.oncell.com